RUNT OF THE LITTER but APPLE OF MY EYE
Part 1

This year, on the 9th of April, my pet girl Sherry will be 7 years old.So, as her birthday approaches, I think it would be apt to post something written by my Pet  Girl Sherry.
She wrote this long back, in the year 2006, when she was a small puppy.My Name is Sherry

Childhood Memories of a Doberman X Girl
By
Sherry Karve 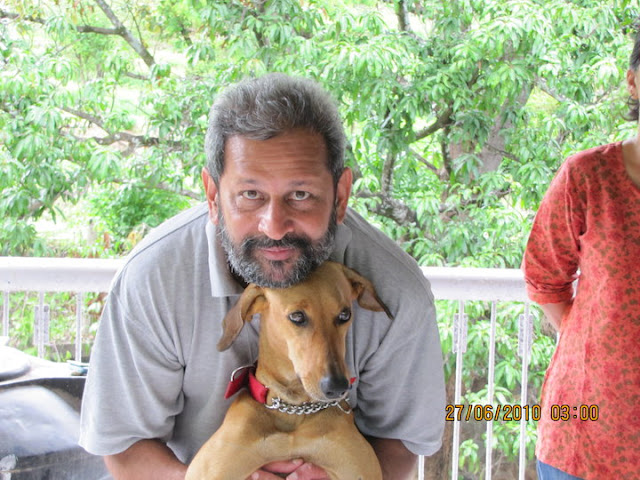 Hi Dear Human Friends. Bow Wow.
Please have a look at some of my pictures. 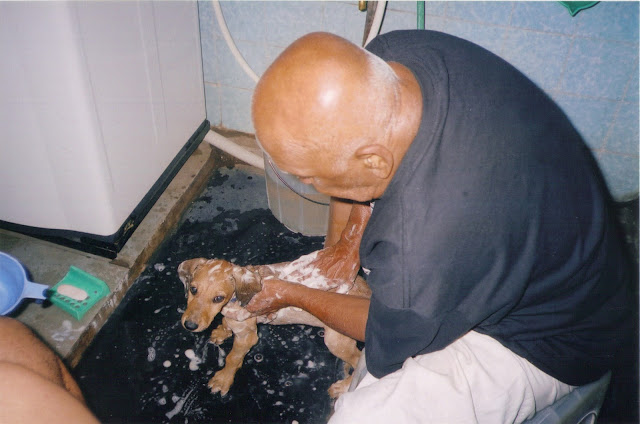 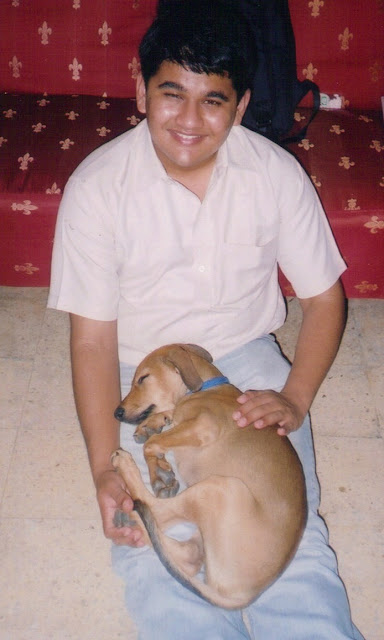 BATH WARM MILK THEN CURL UP ON MY BROTHER'S LAP

By the way, I am a budding writer too.
Here is my first piece of writing which I wrote when I was only seven months old. Now I am ... well never ask a girl's age ...


Do tell me if you like my story and pictures. If you do then I'll post some more about my delightful life.

My name is Sherry. Sherry Karve. I am a naughty young girl, I’m over seven months old and I live with my family in a lovely spacious bungalow surrounded by plenty of greenery.

I wake up early in the morning, jump off my sofa, go to my father’s bed, rub my cold wet nose against his hand and give him a loving lick with my warm soft tongue.

He grunts and growls and opens his sleepy eyes, and the moment he sees me his face lights up and he lovingly caresses me and says, “Good Morning, Sherry.” The he gets up from bed and opens the main door to let me jump out into the garden. First I do my ‘little job’ at my favorite place near the mango tree. Then I generally dig with my paws in the soft morning mud and sniff around with my keen beautiful black nose to find out if there are any new morning smells, not forgetting to run and welcome the milkman the moment he comes on his cycle.

When I return I find that my father is back in his bed and my mother is up and about. She pats and cuddles me and goes about her business making tea in the kitchen while I loiter around the house.

She surreptitiously sneaks to the bedroom and slyly hands over a tidbit to my half-sleeping father under the blanket when she thinks I am not looking.

I pretend not to notice, as I do not want to spoil their fun. Earlier, when I was small and impatient, I used to snuffle out the tidbit from my father’s hand, but this spoilt his fun and he became grumpy.

Now that I am a mature young girl well experienced in the ways of the human world and I have realized that it is better to act dumb and let these humans think they are smarter than me.

So I go outside, sit down and put on a look of anticipation towards the gate and pretend not to notice my mother hiding and peeping through the corner of the window and giggling to herself. 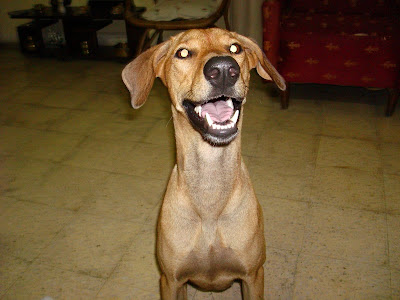 Hey, Look at the eerie glow in my eyes - Scary Sherry

The moment the newspaperman comes on his cycle and shouts ‘paper’, I rush to the gate and fetch the newspaper in my mouth, gripping it just right between my teeth, and hold it up to my horizontal father, who gets up, takes the paper from me and gives me the dog-biscuit he’s been hiding in his hand, as my mother, who has rushed behind me, watches me with loving pride in her eyes.

My brother and my sister, who till now were fast asleep in the other room, call out my name – “Sherry! Sherry!” – and as I dart between their beds wagging my tail, they both hug and cuddle me all over saying, “Good Morning, Sherry. Sherry is a good girl!”   Everyone is cheerful and happy and my day has begun!
I love my family, even though they are humans; and I love my house, my surroundings, the place I stay, the life I live – but before I tell you all that, let me tell you where I came from.


My ‘birth-mother’ is a ferocious Doberman who lives in a bungalow in Kothrud in Pune and my ‘dog-father’ is unknown, though they suspect it may be the Mudhol Hound next door, yes, from the sleek way I look and my temperament  it is most likely the same Mudhol Caravan Hound who lurks in the neighbourhood. For making my registration papers the vet wanted proof, so in the column against Breed he wrote ‘Doberman X’.

I was a sickly weakling, hardly a month old, the only girl, last of the litter of eleven, and the owners were wondering what to do with me.

I was the RUNT OF THE LITTER.

And I was a girl.

Nine of my handsome brothers had already been selected and taken away, and the owners wanted to keep the tenth, the most beautiful and healthy of them all.

They had kept me all alone separated from my ferocious Doberman mother who was growling menacingly in a cage nearby.

No one wanted me and I could hear people whispering how ugly and weak I was and I wondered what fate lay in store for me.

It felt bed and hurt to be unwanted and when I heard people talking about sending me away to a farmhouse, or wanting to ‘dispose’ me of, I felt terrified and shivered with fright as I wondered what was going to be my destiny.

One evening a few people came over and a gentle woman with kindness in her eyes looked at me, and on the spur of the moment lovingly picked me up, and the way she tenderly snuggled me I felt true love for the first time.

This was my new mother.

She took me securely and lovingly in her soft hands, got into a car and they all drove across Pune, past Aundh, across the Mula River, till we reached a bungalow.

The kind woman was wondering what her husband’s reaction would be.

It was dark and scary.

I was terribly frightened and I cuddled up snugly my mother’s arms to feel safer.

Suddenly I found a tough-looking bearded man looking at me.

Shivering with fear I looked back at him in terror as he extended his hands towards me.

But the moment he held me in his large cozy hands, caressed me lovingly, and put his finger tenderly in my mouth, I felt protected, loved, safe and secure.

This was my new father and he had already decided my name – Sherry – the same name of his earlier canine ‘daughter’.

By the way ‘Sherry’ means ‘beloved’ – not the wine drink you are thinking about...!

“She was destined to come here,” my mother said.

My Daddy and Mummy made a nice warm bed for me in a basket and put it below theirs.

And as I drifted into sleep, they both fondled me with their hands.

I felt so wonderful and happy for the first time in my life. I had found my true home and my family.

I am feeling quite sleepy now so I’ll end here and have a nap in my den.

If you want to know more about me, my delightfully mischievous life, and the naughty things I do, please let me know and I’ll tell you all about it...!
Till then, here is picture of my Dad and Me. This photo was clicked, I think, when I was about 9 months old 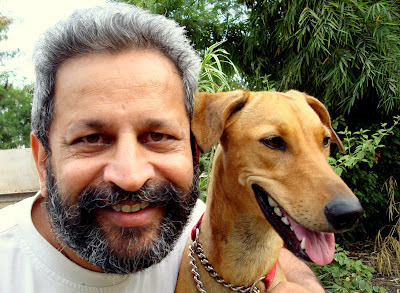 ALL SMILES - MY DAD AND ME

My Name is Sherry - Sherry's Story - to be continued in RUNT OF THE LITTER but APPLE OF MY EYE PART 2 ...


VIKRAM KARVE
Copyright © Vikram Karve 2013Vikram Karve has asserted his right under the Copyright, Designs and Patents Act 1988 to be identified as the author of this work. © vikram karve., all rights reserved.

NB:
No part of this Blog may be reproduced or utilized in any form or by any means, electronic or mechanical including photocopying or by any information storage and retrieval system, without permission in writing from the Blog Author Vikram Karve who holds the copyright.
Copyright © Vikram Karve 2013. All Rights Reserved

Did you like reading this blog post?
I am sure you will like all the 27 stories in my book  COCKTAIL an anthology of Short Fiction.
To order your COCKTAIL please click any of the links below:
http://www.flipkart.com/cocktail-vikram-karve-short-stories-book-8191091844?affid=nme
http://www.indiaplaza.in/cocktail-vikram-karve/books/9788191091847.htm
http://www.apkpublishers.com/books/short-stories/cocktail-by-vikram-karve.html
COCKTAIL ebook
If you prefer reading ebooks on Kindle or your ebook reader, please order Cocktail E-book by clicking the links below:
AMAZON
http://www.amazon.com/dp/B005MGERZ6
SMASHWORDS
http://www.smashwords.com/books/view/87925

A creative person with a zest for life, Vikram Karve is a retired Naval Officer turned full time writer and blogger. Educated at IIT Delhi, IIT (BHU) Varanasi, The Lawrence School Lovedale and Bishops School Pune, Vikram has published two books: COCKTAIL a collection of fiction short stories about relationships (2011) and APPETITE FOR A STROLL a book of Foodie Adventures (2008) and is currently working on his novel and a book of vignettes and an anthology of short fiction. An avid blogger, he has written a number of fiction short stories and creative non-fiction articles on a variety of topics including food, travel, philosophy, academics, technology, management, health, pet parenting, teaching stories and self help in magazines and published a large number of professional  and academic research papers in journals and edited in-house journals and magazines for many years, before the advent of blogging. Vikram has taught at a University as a Professor for 15 years and now teaches as a visiting faculty and devotes most of his time to creative writing and blogging. Vikram Karve lives in Pune India with his family and muse - his pet dog Sherry with whom he takes long walks thinking creative thoughts.

Thank You Shaivi.
Sherry accepts your advance Happy Birthday wishes and says BOW WOW to you.
Sherry's story will continue in my blog.
Bye. Take Care.

I like it so much. advance wishes to Sherry. Looking forward for other sherry stories

I love pets as you do, especially dogs.

"A dog licking ones face is the best psychologist on earth"

Hi Nikhil - You are right - nothing to beat a dog's love