PET PARENTING Bringing Up a Doberman 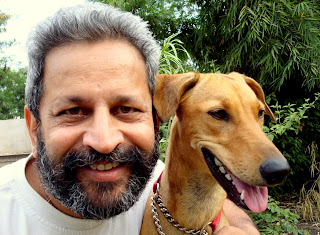 PET PARENTING
Bringing Up a Doberman
By
VIKRAM KARVE
A few years ago a cute little baby Doberman X Caravan (Mudhol) Hound girl came into my life. We named her Sherry, Sherry Karve, and she brought a flood of happiness in our lives and I have enjoyed the best moments of my life with my best friend Sherry.  From her father she has acquired the sleek body, swift run, fearless nature, and sight and scent skills of a Hound, but she displays typical Doberman attributes like her pure Doberman mother – best of both breeds.
My Canine Daughter's Name & Age:
Name: Sherry Karve. Age: Hey, you don’t ask a girl her age…!
In a Word, My Cute Doberman Girl Is:
Loyal, Loving, Strong, Fearless, Fit, Agile, Intelligent, Protective Friend
Her Best Characteristics:
Highly Intelligent, Easily Trained, Superb Guard Dog, Playful Active Loving
Her Most Challenging Characteristics:
One-man dog, does not like to be left alone, aggressive temperament, especially with cats, other dogs, and intruders who try to enter her “territory”, a Doberman needs firm handling at times.
DOBERMAN ATTRIBUTES
Highly intelligent and active, a bit headstrong, needs firm handling, superb guard dog, very protective of her family and territory, fearless, loyal, playful, wary of strangers and children, very easily trained, responds beautifully, needs lots of exercise, loves long walks, vigorous games, hates to be left alone and wants to be a part of the family, loves human company, a fantastic friend and devoted companion, robust and redoubtable.
DOBERMAN PARENTING
You must be physically fit and ready for outdoor exercise (playing and long walks) with your dog. Also you must be mentally agile and young at heart to interact with your dog who will demand a lot of your attention.
You must have plenty of space, a bungalow with a large playing area and a garden. In case you live in a flat, you must have the time, inclination and energy to take your Doberman for brisk long walks at least twice a day to a nearby ground for some vigorous exercise and also play rough and tough indoor games like TUG OF WAR
http://karvediat.blogspot.com/2011/01/stress-management-by-playing-with-your.html
You must devote at least three hours a day exclusively for the dog, follow regular routine without exception and give mental stimulation to your Doberman by playing with her and talking to her. Yes, a Doberman is a highly intelligent dog who loves interaction and is always on the alert waiting for you to communicate and she will always try to communicate too. So make sure you talk a lot with your Doberman.
Doberman is a one-owner dog, likes company of master, is overly protective of master and territory, hates loneliness
A Doberman is a superb Guard Dog and certainly not a very friendly cuddly dog for children and visitors. However a Doberman will shower the master with love, will demand love from her master and ask to be cuddled and fondled by the master.
Does not like strangers, cats, other dogs and children, and is always ready to attack intruders.
Having a Doberman is not advisable for families with small children who may go in for a more docile and friendly breed.
Highly intelligent, easy to train. (I trained her to fetch the newspaper in just a couple of minutes - see the picture below)
Ideal Companion and a very Loyal Friend
A Doberman requires companionship and hates to be left alone.
A Doberman requires firm handling and lots of playing and physical activity.
Also a Doberman tends to be a highly loyal "one-man dog" and loves me more than the other family members and even gets jealous at times and growls at my wife if she gets too close, especially during our play sessions. Sometimes a Doberman may not like someone else getting to close to the master (or mistress) so be careful and don’t take your Doberman along with you on that mushy romantic date.
A Doberman is a very low maintenance dog. The only grooming you need to is to give her a nice bath once a fortnight followed by a nice vigorous brushing. She is a very clean dog who grooms and licks herself clean every evening.
So tell me, do you want to get a Doberman into your life? And if you do, please don’t dock her tail or crop her ears as I think it is a cruel thing to do.
Bow Wow.
VIKRAM KARVE


VIKRAM KARVE educated at IIT Delhi, ITBHU, The Lawrence School Lovedale, and Bishop's School Pune, is an Electronics and Communications Engineer by profession, a Human Resource Manager and Trainer by occupation, a Teacher by vocation, a Creative Writer by inclination and a Foodie by passion. An avid blogger, he has written a number of fiction short stories and creative non-fiction articles in magazines and journals for many years before the advent of blogging. His delicious foodie blogs have been compiled in a book "Appetite for a Stroll". Vikram lives in Pune with his family and pet Doberman girl Sherry, with whom he takes long walks thinking creative thoughts.