During my recent visit to New Zealand – while travelling from Christchurch to Queenstown - I was pleasantly surprised to see a Bronze Statue of a Dog – a memorial for James Mackenzie’s legendary Sheepdog (Collie).

It was the first time that I had seen a monument dedicated to a dog.

The sheep dog statue stands proudly on the shores of the unique exquisite turquoise waters of Lake Tekapo – amidst breathtaking scenery of snow capped mountains of the Southern Alps.

Lake Tekapo is located in the heart of Mackenzie County in the Canterbury Region of South New Zealand – halfway between Christchurch and Queenstown.

After leaving Christchurch – you drive past the lush green Canterbury Plains – then cross the towns of Geraldine, Fairlie and Kimbell – and then you climb up – and traverse across the Burkes Pass into scenic basin in the heart of the mountainous South Island called ‘Mackenzie Country’.

Mackenzie Country has fascinating landscapes and two lakes Tekapo and Pukaki whose waters have a unique turquoise colour caused by glacial flour suspended in the water.

At the heart of Mackenzie Country is the beautiful Lake Tekapo with its marvelous turquoise waters surrounded by magnificent scenery and the awe-inspiring snowcapped peaks including the cloud-piercing Aoraki Mount Cook.

(The Mackenzie Country was free of human beings until several hundred years ago with the arrival of the Maori in search of food. The Moa, a large flightless bird now extinct, and other birds were hunted and eels fished for in the area. The Maori called the area Takapo – meaning “To leave in haste at night”. The current name – Tekapo – is possibly a corruption of Takapo).

As I told you earlier – Lake Tekapo is nestled in the heart of New Zealand’s South Island. The lake lies at the foot of the Southern Alps, which rise to a height of 3 kilometres. New Zealand’s highest mountain, Mount Cook (Aoraki) is a short drive away and rises to 3,753m (12,313ft).

Lake Tekapo is truly stunning – a breathtaking sight with its turquoise waters and surrounded by spectacular scenery and a most wonderful view of the Southern Alps including the snow-covered mountains like Mount Cook.

Here is a picture of Lake Tekapo with Mount Cook in the distance which I took on my smartphone on 26 December 2015.

Standing proudly on a large rock on the shores of Lake Tekapo is a bronze statue of a Collie Sheep Dog.

In 1855 James Mackenzie – a Scottish Shepherd discovered this basin that now bears his name (Mackenzie Country).

As per local folklore – James Mackenzie was a “Sheep Stealer”.

The story goes on to say that “Sheep Thief” James Mackenzie had a loyal Collie Sheep Dog named “Friday” who used to protect his sheep and hustle the flocks of stolen sheep into his sheep farms.

By stealing sheep from the Canterbury Plains and driving them inland across mountain passes into this remote area with the help of his Collie Dog ‘Friday’– James Mackenzie had become a prosperous sheep farmer.

One day James Mackenzie’s deeds caught up with him.

James Mackenzie was arrested and sent to jail.

The authorities went up the Burkes Pass into the “Mackenzie Basin” to retrieve the stolen sheep and return them to their rightful owners.

The Sheepdog ‘Friday’ could not be restrained – and the dog aggressively attacked anyone who tried to come near his sheep.

Finally – Mackenzie's Collie Sheep Dog ‘Friday’ was shot and put down by the authorities.

The loyal Dog resolutely performed his duty towards his Master till his last breath and gave up his life for his Master.

The capture of James Mackenzie, for being “in the company of a thousand stolen sheep” as he rustled them with his dog ‘Friday’, through a remote alpine pass into “a plain of immense extent” resulted in his deeds being immortalized and his name being given these highlands ever since – hence the area is called “Mackenzie Country”.

Many years later – the residents of Mackenzie Country decided to construct this monument in memory of James Mackenzie’s legendary Collie Sheepdog ‘Friday’ and all the hardy working Collie Dogs without the help of which the grazing of this mountainous country would have been impossible.

Like Mackenzie – in the 19th century – many Scottish shepherds came to work on the pastoral runs of the Eastern South Island – and the high country could not have been farmed successfully without the Border Collies they brought with them.

Thus - in addition to ‘Friday’ – this monument at Lake Tekapo honours all these ‘Canine Scots’ of Mackenzie Country.

This monument is dedicated to all good and faithful Collie sheepdogs who always gave their best irrespective of the weather or hardships, in burning heat and frozen snow.

The bronze dog statue was commissioned by Mackenzie Country residents in recognition of the indispensable role of the sheepdog in their livelihoods. The sculptor was Innes Elliott of Kaikoura, with a dog called Haig, belonging to a neighbour, being the model. Elliott reported the sculpting process took approximately 15 months. Clay for the model came from the insulator works in Temuka, with a plaster cast of it made and sent to London in 1966, where the statue was cast.

The statue was unveiled on the 7th of March 1968 by Sir Arthur Espie Porritt, Governor-General of New Zealand.

The inscription on the monument plaque reads:

“This monument was erected by the runholders of the Mackenzie County and those who also appreciate the value of the collie dog, without the help of which the grazing of the mountain country would be impossible.
Unveiled on March 7, 1968, by Sir Arthur Espie Porritt, BT, GCMG, KCVO, CBE, Governor General of New Zealand
‘Beannachdan Air Na Cu Caorach’ (which in Gaelic means “blessings on the sheep dogs”).”

Here are a few pictures of the ‘Tekapo Dog Memorial’ which I took on my smartphone during my visit to Lake Tekapo on the 26th of December 2015.

‘Friday’  - the sheepdog belonging to Mackenzie, the folk hero who was the first European to find the route into this mountainous Basin – and all sheepdogs are remembered with the phrase “Beannachdan Air na Cu Caorach” (which means “Blessings on the Sheep Dog”) on the monument plaque. 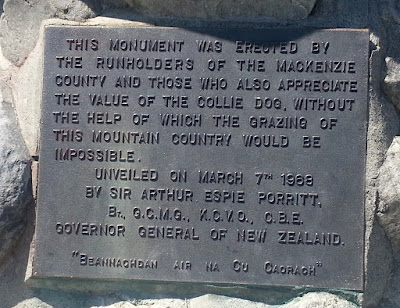 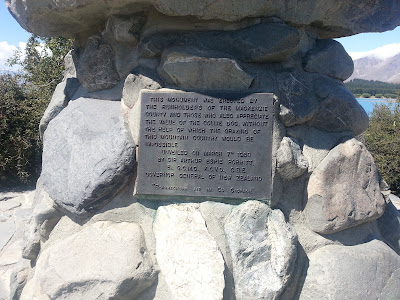 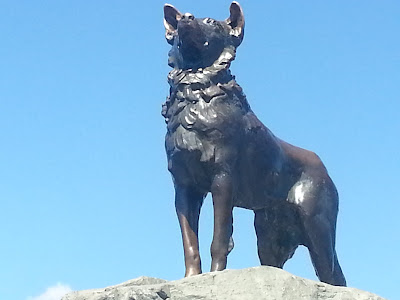 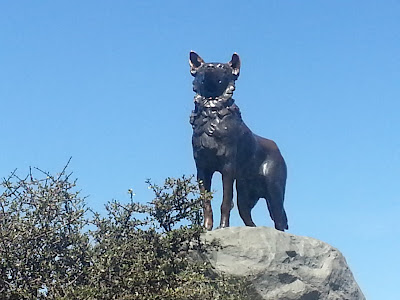 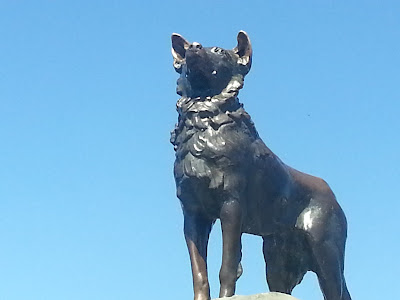 On the shores of the Turquoise Waters of Lake Tekapo 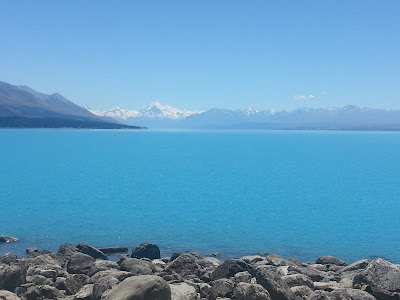 Lake Tekapo is a scenic resort with picturesque surroundings and breathtaking views. The air is pure and the sky is clear. For those interested in astronomy, this place has the darkest night skies and observatory open to public. There is plenty to do in the beautiful tranquil environment and good facilities for accommodation and food. Lake Tekapo is conveniently connected – located midway between Christchurch and Queenstown – a 3 hour drive from either place – and is an ideal stopover for all types of tourists – a good honeymoon destination too. On our next visit – we will certainly spend a day or two in Lake Tekapo.