WHAT TYPE OF PET DOG DO YOU WANT

Pet Dogs may be classified into 5 types:

So, before you get a dog you must decide what type of dog you want.

Some traits are breed-specific, and some can be ascertained by observation, when the dog is a puppy, especially in cases of rescued stray dogs.

For example, try the domination test.

Walk towards the unknown puppy.

The bend over the puppy, looking him firmly in the eye, and try to “dominate” the puppy dog by stroking the puppy from the top of the dog’s head downwards over the dog’s back towards its tail.

If the puppy growls and objects to your domination, the dog may fit in “Type 2” (watch dog).

A WATCH DOG will bark first and may or may not bite or attack.

Even if the dog attacks the intruder it will do so after giving adequate warning by barking so that the intruder has a chance to back off.

The job of a Watch Dog is to bark and raise an alarm when a stranger enters your house or property.

In fact, even many small breeds make great watch dogs.

It the puppy jumps at you and tries to attack you, it is not “accepting” your domination and is trying to reverse your “domination”.

A good GUARD DOG will attack the intruder immediately.

The job of a Guard Dog is to look intimidating and act in a ferocious manner and be ready to protect his family and territory if the need arises by attacking any trespassers.

Both Guard Dogs and Watch Dogs bark to alert their owners of an intruder’s presence and scare away the intruder.

But the Guard Dog is capable of attacking the intruder should he trespass.

A Guard Dog means business and will attack and bite trespassers.

Some breeds are excellent Watch Dogs but not good Guard Dogs.

This is because they bark loudly to alert their masters of intruders but are not aggressive in nature and are not given to assertive behavior.

Watch Dogs will bark loudly, but they will hesitate to attack and bite when required to do so.

Guard Dogs protect by attacking and biting intruders whenever required.

Like I said, good guard dogs will attack the trespasser immediately the moment he intrudes into the dog’s territory, rather than waste his time by merely barking.

Guard dogs will also attack any other dogs or animals they perceive as threats or prey.

That is why Guard Dogs must look tough and menacing and be ferocious in nature and they must not hesitate to attack a trespasser.

Watch Dogs must raise an alarm and frighten off the trespasser.

Even small but attentive dogs may function well as Watch Dogs but a guard dog must be strong, ferocious and aggressive.

When stroked by a stranger, if a puppy accepts the domination in a friendly manner, then it is likely to be good family dog.

The puppy will not growl or object in any way to your stroking the top of its head and back and may even snuggle towards you.

Such a dog is likely to turn out to be a good and amiable family dog that is friendly towards children and guests.

If the puppy totally submits to your stroking while you move your hand over the top of the dog’s head and back, then is showing signs of being a good lap dog.

The puppy may avert its eyes and cower; it may sit down, roll over or even urinate out of total submission.

Such a puppy may grow up into a submissive lap dog.

A LAP DOG is an adoring pet who would gladly spend the entire day in the lap of the owner.

Lap Dogs are cuddly and affectionate.

Many dog owners, especially women, who are lonely and yearn for love prefer to have a Lap Dog.

When you stroke an unknown dog, and it just ignores you and walks away, this independent attitude is a sign of a good kennel dog or a farm dog.

This dog likes to live its life in its own way.

This type of dog has a free and independent nature and likes to be left alone and does not get very attached to human owners.

You just have to feed your dog and then let the dog roam around freely.

WHAT TYPE OF PET DOG DO YOU WANT ?

So which type of pet dog do you want?

Do you want a guard dog, a watch dog, a family dog or a lap dog?

You decide – and make sure you get the right type.

Remember, when you select a puppy, take care that you observe the puppy well and select the right type of dog you want.

Otherwise, the cute puppy you thought will be a good family dog may actually turn into a ferocious guard dog, and vice versa.

Before I end, here is a picture of my pet girl Sherry (Doberman X Caravan Hound Cross) who is a superb Guard Dog - just notice her observant eyes and alert stance as she guards the house. 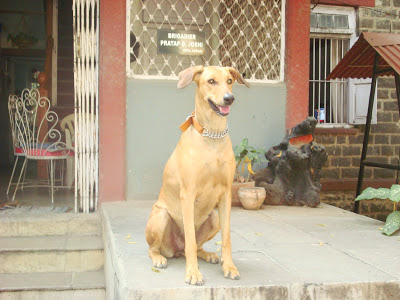 VIKRAM KARVE
Copyright © Vikram Karve 2013Vikram Karve has asserted his right under the Copyright, Designs and Patents Act 1988 to be identified as the author of this work. © vikram karve., all rights reserved.

Disclaimer:
All stories in this blog are a work of fiction. The characters do not exist and are purely imaginary. Any resemblance to persons, living or dead, is purely coincidental.
NB:
No part of this Blog may be reproduced or utilized in any form or by any means, electronic or mechanical including photocopying or by any information storage and retrieval system, without permission in writing from the Blog Author Vikram Karve who holds the copyright.
Copyright © Vikram Karve 2013. All Rights Reserved

Did you like reading this blog post?
I am sure you will like all the 27 stories in my book  COCKTAIL an anthology of Short Fiction.
To order your COCKTAIL please click any of the links below:
http://www.flipkart.com/cocktail-vikram-karve-short-stories-book-8191091844?affid=nme
http://www.indiaplaza.in/cocktail-vikram-karve/books/9788191091847.htm
http://www.apkpublishers.com/books/short-stories/cocktail-by-vikram-karve.html
COCKTAIL ebook
If you prefer reading ebooks on Kindle or your ebook reader, please order Cocktail E-book by clicking the links below:
AMAZON
http://www.amazon.com/dp/B005MGERZ6
SMASHWORDS
http://www.smashwords.com/books/view/87925

A creative person with a zest for life, Vikram Karve is a retired Naval Officer turned full time writer and blogger. Educated at IIT Delhi, IIT (BHU) Varanasi, The Lawrence School Lovedale and Bishops School Pune, Vikram has published two books: COCKTAIL a collection of fiction short stories about relationships (2011) and APPETITE FOR A STROLL a book of Foodie Adventures (2008) and is currently working on his novel and a book of vignettes and an anthology of short fiction. An avid blogger, he has written a number of fiction short stories and creative non-fiction articles on a variety of topics including food, travel, philosophy, academics, technology, management, health, pet parenting, teaching stories and self help in magazines and published a large number of professional  and academic research papers in journals and edited in-house journals and magazines for many years, before the advent of blogging. Vikram has taught at a University as a Professor for 15 years and now teaches as a visiting faculty and devotes most of his time to creative writing and blogging. Vikram Karve lives in Pune India with his family and muse - his pet dog Sherry with whom he takes long walks thinking creative thoughts.

Just an awesome post! And Sherry is so pretty. :)

Thanks for telling these !
I love dogs
but I don't have a dog any more
:(

I had a guard dog if I categorize

@ Shrinath Shenoy:
Good observation. This photo was taken a few years back during a visit to the house of Brig Pratap Joshi (my late father-in-law) who was a dog lover. Yes, Sherry stands guard outside her grandfather's bungalow. I'll post some pictures of her guarding our home too.

@ Priyanjana :-
You're right - nothing to beat a guard dog, especially in today's times

@ Monika
Thanks. I told Sherry and she sends you her love and "Bow Wow"

Excellent post about the dog breeds. However, Commitment is the main criteria before getting a puppy. I would prefer a breed that suits my life style and environment. Ultimately he/she is a family member.