ANZAC Day - Indian Soldiers Fought in the Battle of Gallipoli

I am sharing an article on The Battle of Gallipoli by Srikant Kesnur (with the author’s permission). I have suitably edited the article for easy reading on the digital screen.

WHOSE GALLIPOLI IS IT ANYWAY by Srikant Kesnur

(Note – This is a reproduction, with minor variations, of an article written last year, on the Indian connection with the Battle of Gallipoli, in World War 1.

Since we are observing the centenary year of the end of the Great War (in Nov 1918) this piece, arguably, continues to be relevant.

In any case, I believe, that History can gain salience only if characterized by presence, persistence and prominence.

Some battles of the World Wars achieve great fame and recall value.

And some are destined to oblivion.

Gallipoli would perhaps rank the foremost among them where India is concerned.

(And yet we must recall it, if not for anything, at least to remember the Indian contribution. At least today, 25 April, which is the Gallipoli day. Or ANZAC day as it is known in Australia and New Zealand)

The campaign has an interesting history.

The WW 1 had reached some sort of stalemate on the Western Front.

Russia was also facing difficulties in sustaining herself and accessing supplies through the frozen seas in the north.

When the Ottoman Turks decided to side with the Central powers (Germany and Austria- Hungary), the Black sea route was also threatened.

So Britian hit upon opening a new front in the Dardenelles to seize the Bhosphorus and ultimately take over Istanbul.

Hence the plan to launch an amphibious attack on the Gallipoli peninsula, the European part of Turkey.

A Map of the Gallipoli Peninsula in the European Part of Turkey is given below. 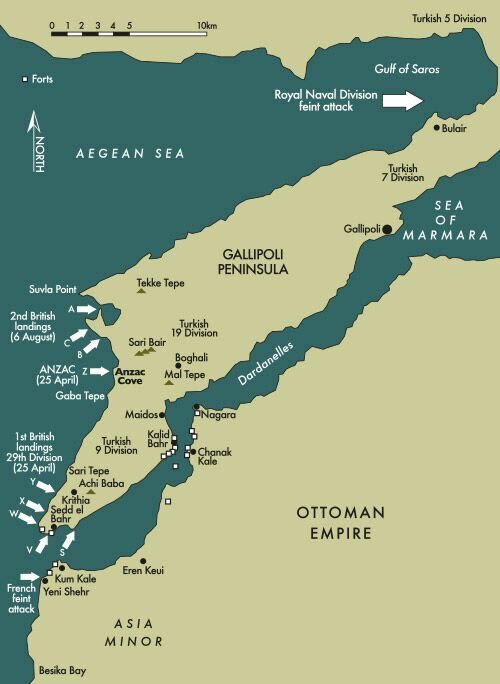 When Turkey (Ottoman Turks) decided to side with the Central Powers (Germany and Austria-Hungary), the Black sea route was threatened.

So Britian hit upon opening a new front in the Dardenelles to seize the Bhosphorus and ultimately take over Istanbul (Constantinople).

Hence the plan to launch an amphibious attack on the Gallipoli peninsula, the European part of Turkey.

It was also designed as an out flanking manoeuvre by the Brits to penetrate Germany through its ‘soft underbelly’.

The Ottoman Empire derisively referred to as the ‘sick man of the world’ was in decline and hence it was presumed that they would just roll over.

But the invasion of Gallipoli that commenced on 25 Apr 1915 as part of the Mediterranean Expeditionary Force was a disaster.

Led by the British it consisted of troops from Ireland, France, Australia, New Zealand and above all India.

For nine long months, until 09 Jan 1916, the campaign trudged along but the Turks fought hard and would not give up.

The unexpected (at least to the Allies) loss had far reaching consequences.

Winston Churchill lost his job as the First Lord of Admiralty and the idea of approaching Germany from East was put in cold storage.

For the Turks, the victory formed the basis of their new nationhood and their leader at Gallipoli, Mustafa Kemal went on to become the first President of the newly formed Turkish Republic.

A grateful nation went on to christen him Ataturk (Father of the Turks).

The Brits, French and Irish perhaps preferred to forget the war, but to the Aussies and New Zealanders it was a great heroic loss, which in some ways defined their nationhood too.

That is why 25 April is commemorated as the ANZAC day in both these countries and observed with due ceremony, dignity and remembrance of the departed.

This battle formed the basis of ANZAC culture which is a strong theme in these nations even today.

India was a part of the ANZAC (Australia New Zealand Army Corps) division.

5010 Indian Soldiers took part in the war of which a staggering 1926 were killed and 3863 injured (I have not got my math wrong. Some were injured more than once).

(Mountain Artillery was the only Indian Artillery between 1858 and 1935).

In pro rata basis Indians had the highest casualty rate in the ANZAC division because the Aussies and NZ had higher numbers in this theatre. They had a casualty rate of about 14% of troops deployed and we about 40%.

The Indian units that took part in the campaign were 69 Punjab (now 2 Punjab and 1st Bn Bde of Guards. It is the Seniormost Infantry Battalion of the Indian Army), 14 KGO Ferozpur Sikh (now 4 Mech Inf) and 1/5 Gorkha Rifles (FF), 89 Punjab and the two Artillery elements viz. 1 Royal (Kohat) Mountain Battery (FF) and 3 (Jacob’s) Mountain Battery (then manned by Sikh and Punjabi Muslim troops) went to Pakistan while 1/6GR and 2/10 GR went to Britain after the partition. And 29 Inf Bde continued to be in the Indian Army’s ORBAT (Order of Battle).

For three years in Nairobi – I was a regular part of the ANZAC day commemorations at the most beautiful and treelined Ngong Commonwealth wargraves cemetery.

Usually organised by the Australian High Commission, one of the most moving that I attended was a joint commemoration by Australian and Turkish Ambassadors.

ANZAC day is an early morning service at the crack of dawn, perhaps because the atrack was launched at dawn.

Once the poignant ceremony is over you adjourn for tea and special ANZAC biscuits.

Thereafter, the Defence Attaches would get together for breakfast and exchange notes.

And each time all the DAs and other guests would be surprised that India had such a large contingent at Gallipoli.

Why did the Indian contribution to this doomed campaign go unheard, unsung and unwept…?

It was natural for Brits not to focus on it too much.

They had lost to an ‘inferior’ race, the brown skinned Turks and did not want their loss to be advertised among people of other colour.

In any case, Gallipoli had no strategic consequences in the final outcome of the war.

For Indian national leaders pre and post independence, wars fought under a foreign flag were problematic and met with ambigious response.

So a war that formed the foundation of nationhood of 3 countries viz. Turkey, Australia and New Zealand, became one of little importance for India.

Sad, because in such wars may be interred millions of heroic tales and poignant moments.

The centrality of Gallipoli to the Aussie psyche can be gleaned from the fact that for one tough Ashes series in England, Steve Waugh, arguably Australia’s most inspiring Captain, took his team to Gallipoli enroute to England so that they could be motivated by the exploits of their forebears.

For all of Dhoni’s brio and Viraat Kohli’s aggro, I don’t ever see them assembling at Kohima or Rezangla to get inspired.

And if per chance any of our sportsmen did get into a venture like this, our liberal media would be hauling them over coals for unnecessarily ‘militarising’ sport.

We are still observing the centennial years of the Great War of 1914 to 1918.

By World War 2, two decades later, we were at 2.5 Million, the largest volunteer Army in the world.

Gallipoli may be only a small footnote in the history of war or of Indian Army and it simply might be of no interest to our media and current elites, but to those to who died or were injured in the war, today we must pay homage.

The last word on this must belong to Kemal Ataturk who told a visiting British, Australian and NZ delegation in 1934:

“Those heroes that shed their blood and lost their lives. You are now lying in the soil of a friendly country. Therefore rest in peace. There is no difference between the Johnnies and the Mehmets to us where they lie side by side Here in this country of ours. You, the mothers, Who sent their sons from far away countries Wipe away your tears, Your sons are now lying in our bosom And are in peace. After having lost their lives on this land they have Become our sons as well.”

Alas, even Ataturk did not know that the Indian Army not only had Mehmets and Johnnies but also Singhs and Gurungs and Kumars and Thambis, all who went by the name of Jawans.

For those wondering whose Gallipoli it was, we must also stake claim.

PS 1 – I owe a debt of gratitude to *Cdr CH Gomes (Retd), my first Commanding Officer in the Navy and a man of many causes including Gallipolli.* He provided much of the content and context for this piece. *I also acknowledge some omissions of last year pointed out by veterans and have tried to incorporate them this year*.

PS 2 – Do read this piece below too, if interested for more info. Some facts seem to be at variance with what I have written but the spirit is the same.