I do not know whether there is a “seasickness test” now for navy aspirants – but around 40 years ago – way back in the 1970s – after you cleared the Services Selection Board (SSB) – there was a comprehensive medical examination – but I do not recall any test for “seasickness”.

The result was that you came to know of your propensity to seasickness only when you sailed out to sea – which for some terribly seasick types – was quite late in the day – and many who could not bear their “seasickness” opted out of the surface navy by “volunteering” for Submarines or Air Technical Branches.

I am sure that with advances in medical technology – there is a quantitative “seasickness test” now.

But – here is a story about how I learnt about a qualitative “seasickness test” from a hardened sailor – what they call in the navy – a tough “sea-dog”...

The sea was very rough – and the ship was rolling and pitching quite violently.

Those with a propensity for seasickness – started feeling seasick.

I realized that the Sea-Dog Master Chief Petty Officer was absolutely right.

A few days later the Fleet Commander – a Rear Admiral – embarked on board our ship.

The Admiral was a towering figure – over six feet tall – with an impressive beard – and had an imposing personality.

As we sailed – the sea got quite rough – and the ship started rolling and pitching quite a bit.

Yes – believe it or not – the Admiral was a seasick type.

In fact – there was a bucket kept for the Admiral on the bridge.

And you know how to carry out the qualitative seasickness test (at your own risk).

I dug deep into my photo albums and pulled out this nostalgic picture taken 37 years ago of the Master Chief Petty Officer (MCPO) who gave me this Navy Gyan on Seasickness.

You can see us – me to the extreme left – and my MCPO to the extreme right – we are drinking away and enjoying ourselves at a departmental booze-up session with my sailors at Sailors Home Cooperage Mumbai. 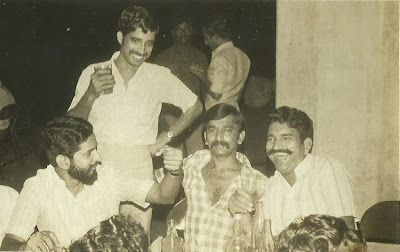